A Case for All-Round Weight-Lifting

Arthur Saxon writes in The Development of Physical Power (1906):

Practice everything—single and double-handed press in dumbbells and bar bells, single and double-handed lifts, all the way in dumbbells and bar bells, snatching and swinging, jerking and pressing, lying down with weights, supporting weights, lifting weights while laid on the back, ring weights, human weights, and, if possible, double-handed lifts to the knee, and harness lifts, also holding the bell aloft and bringing a weight after with the disengaged hand, and raising bells aloft by what is known as the Continental style of lifting, described in this book. Also anything else that may suggest itself to your mind, such as heavy weights at arm’s length, raising bells overhead stood on end on the hand, juggling with weights by throwing them from hand to hand overhead, catching in the hollow of the arms, etc. A method of practice such as the above would not only bring into play every hand and strap of muscle you possess, but also give you a far better knowledge of all-round weightlifting, than you could possibly obtain if you practiced three or four lifts only to the exclusion of all others. 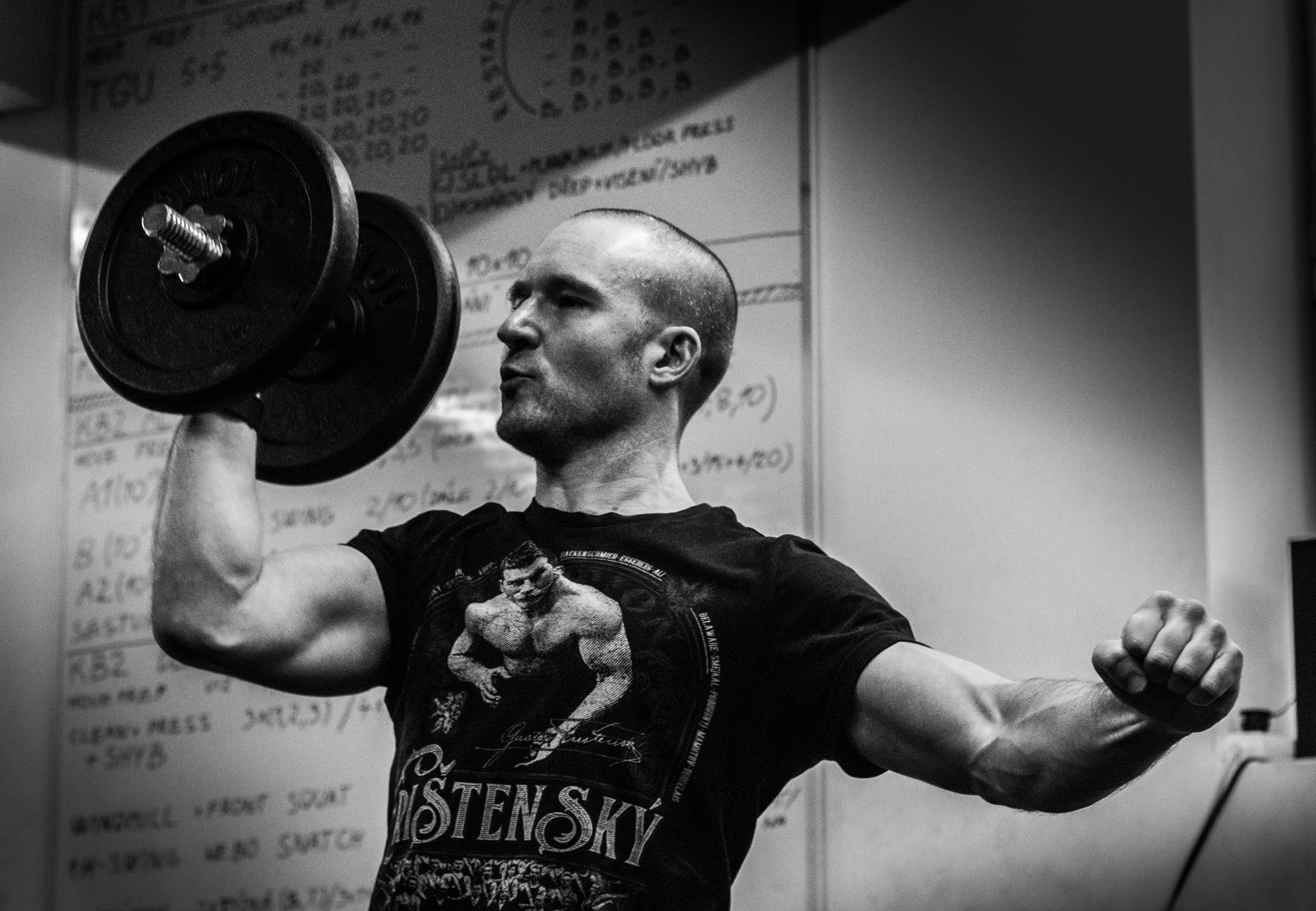 Gord Venables writtes in his article The Ancients Trained With Dumbbells (1942):

Although the use of light dumbells has been generally known and approved of in the last half century in particular, and hardly a school, college or other gymnasium does not have its collection of light dumbells, few are completely aware of the great strength building value of dumbells. And by strength I don’t mean only muscular strength, but internal strength as well, organic and glandular. All the great strong men were habitual users of dumbells. In fact the majority of their was at times done with dumbells. Consider a few of them. Eugene Sandow, Arthur Saxon and others set many records and standards for strength and physical development, some of which have not been approached.

Sandow, who combined showmanship, lifting ability, and marvelous posing with his exceptional body; Saxon, who did not care about posing but traveled around the world astonishing huge audiences with his strength and lifting ability, and Louis Cyr, a man who weighed well over 300 lbs. and compared more than favorably in strength, size for size with an elephant. There were literally hundreds of other famous strong men of the same and a later period who trained almost exclusively with dumbells.

With dumbbells, yes. Almost exclusively with dumbbells, not exactly. As we will see, old-time strongmen’s philosophy was simple: if it is heavy, lift it from the ground and overhead, and get strong!

Our discussion so far has cited the fact that dumbells had long proven their worth as curative and health-building mediums, the fact that the strongest men of all time were regular users of heavy dumbells proves that they are excellent for building strength. And the fact that the best built men of the past and present are dumbell users once again proves that they are excellent as well for producing a magnificent physique. Siegmund Klein, famous perfect man, uses dumbells a great deal in his training. Frank Leight, New York City policeman, winner of many strength and physique honors, concentrates on the use of heavy dumbells in a large part of his training. John Grimek, Mr. America, uses dumbells more than any other training medium. The forward raise done alternately is one of his favorites, one and two hands swing, two hands cleaning with heavy dumbells, alternate press with dumbells ranging up to 125 lbs., side and bent press, clean and jerk, all forms of heavy lifting are included in the Grimek training schedule.

The cases where a man has reached a sticking point, and then through heavy dumbell training has again forged ahead in building his strength and physique, are legion.

The Lost Art of Dumbbell Lifting

Many individuals and organizations later tried to revive the real dumbbell system of training, such as the United States All-Round Weightlifting Association, Milo magazine, Ross Enemait, and Crossfit. Despite their efforts, most people are still doing dumbbell curls, seated presses and triceps kickbacks, or high-rep swings (assuming that dumbbell swings look like Hard Style kettlebell swings), snatches, or presses.

As for old-school dumbbell lifting revival, one name stands prominently out Brooks Kubik. Brooks wrote many articles about old-school dumbbell lifting in his Dinosaur Files. In the late 1990s, he eventually published a homemade video called The Lost Art of Dumbbell Training, covering fundamental one-hand dumbbell lifts (swing, clean, military press, push press) and two-hand lifts (clean and press, clean push press). More than a decade later (2012) he has published an excellent follow-up in the form of a book called Dinosaur Dumbbell Training.

Hard Style Dumbbelle follows in the footsteps of the old-school strongmen and modern revivalists. It offers detailed, principle-based step-by-step instruction from zero to hero, do this! programming and strength standards.

We can see the slow shift from lifting to exercising already back in the old days. George Walsh writes in The Dumb-Bell Way to Strength (published in Health & Strength Annual, 1936) about so-called official lifts, sanctioned by the British Amateur Weight-Lifting Association, such as press or clean & jerk, and leverage lifts, like lateral raise standing and lying, seated press, etc. The reason for including these exercises was simple, first of all, to isolate specific muscles, and/or make certain lifts easier. Walsh writes about seated press in comparison with orthodox (standing) Military Press:

Such a position relieves the lifter of the necessity for rigidly controlling the waist – always a considerable effort in a single-handed press – and throws the whole of the work upon the shoulder muscles.

Today we know that it is not exactly an advantage. His treatise covers the full body lifts as well, and in great detail, but after covering a few isolation exercises, Walsh makes to note:

So far we have only considered simple straightforward movements of a very local character, but the Clean and Jerk is a lift which calls into play every major muscle in the body. The Lateral Raises, the Crucifix and the Presses [seated, note P.M.] can be learned by any novice in a lesson or two, but the Clean and Jerk is not to be learned so easily and careful attention to detail must be paid by all those who are not already familiar with it.

« Lifts which call into play every major muscle in the body » are exactly the exercises we are after, although in our HDL Program Minimum we will cover more accessible lifts than double dumbbell clean & jerk. We are interested in lifting, not pumping or exercising.

Many authorities of yesterday (and today!) recommended just light dumbbell training (weightlifting was supposed to make you slow). Opposite to the prejudices of that time (and today’s time!), Thomas Inch recommended bodyweight drills, dumbbell, and barbell exercises.

…then you won’t be led into ‘trying your strength,’ for the means to do so won’t lie ready to your hand. My idea is to describe and recommend a very few of the forty-two known weightlifting movements, to be performed once a day with the number of repetitions advised, always with a very light weight so there can never be the least danger of the work interfering with your speed of the movement.

His comprehensive Spalding’s Book on Boxing and Physical Culture presents two dumbbell exercises, one pull, one push: dumbbell swing and dumbbell jerk (actually a push press). Interestingly, Inch prescribes relatively heavy starting weights (40 lb. for swing, 40 to 55 lb. for push press), and low reps, up to 5. Inch knew very well that the boxers are combat athletes who lift weights as part of their general physical preparation, they are not lifters trying to break and weightlifting records.

Inch’s modified program minimum is the basis of the SDS program, with an only minor change: we will keep the swing as a ballistic drill, but we will substitute the push press for a grind, one-arm press, to get a perfect match of one pull-one push, one ballistic and one grind. And if weightlifting is your primary form of physical training, you can undoubtedly go heavier.

Dumbbells are extensively used by some high-level coaches in combat sports, such as renowned boxing coach Steve Baccari. Steve is very fond of Thomas Inch’s dumbbell minimum for boxers:

I used that with a large group of fighters, with outstanding results. In my opinion, when it comes to strength training, there’s nothing new under the sun… Old school is the best school!

One of the biggest proponents of dumbbell training for fighters is Ross Enemait. Brooks Kubik emphasized heavy low-rep pure strength work; Ross took the explosive training and conditioning road. His Infinity Intensity is one of the few modern resources covering many old-school dumbbell lifts and their variations.

What You Will Learn

At StrongFirst, we have the best teaching methodology and system for kettlebells (SFG), barbells (SFL), and bodyweight (SFB). Brett Jones, StrongFirst Director of education wrote in the discussion about dumbbells on the StrongFirst forum: « Dumbbells are a great tool… it’s the principles« . For those interested in implementing another top tool to get stronger, using the same principles of our system, here we go. The Marine Corps Martial Arts Program motto goes: « One mind, any weapon« .

When Pavel Tsatsouline introduced the kettlebell in the Western world, many people who did not know how to use it correctly were using it as dumbbells, actually, as modern dumbbells, i.e., doing curls, lateral raises, and flies. Some still do.

We have learned how to lift kettlebells properly, and the Hard Style system got systematized and streamlined. Guess what happened : if there is no access to kettlebells, Hard Style gireviks are lifting dumbbells as kettlebells! As you will learn in the HDL special workshop, there are many differences apart from the apparent similarities. And we know that, as Hunter S. Thompson said: « …anything worth doing, is worth doing right« . We will teach you how to lift dumbbells right, old-school, Hard Style.

Stop arguing about what is better: bodyweight training, barbell, kettlebell, clubbell, or dumbbell.

Stop arguing if unilateral or bilateral strength training is more functional. Whatever bell it is, lift it, and get stronger!

This website uses cookies to improve your experience while you navigate through the website. Out of these cookies, the cookies that are categorized as necessary are stored on your browser as they are essential for the working of basic functionalities of the website. We also use third-party cookies that help us analyze and understand how you use this website. These cookies will be stored in your browser only with your consent. You also have the option to opt-out of these cookies. But opting out of some of these cookies may have an effect on your browsing experience.
Necessary Toujours activé
Necessary cookies are absolutely essential for the website to function properly. This category only includes cookies that ensures basic functionalities and security features of the website. These cookies do not store any personal information.
Non-necessary
Any cookies that may not be particularly necessary for the website to function and is used specifically to collect user personal data via analytics, ads, other embedded contents are termed as non-necessary cookies. It is mandatory to procure user consent prior to running these cookies on your website.
Enregistrer & appliquer